Last week I wrote a post on Multiple Trays. 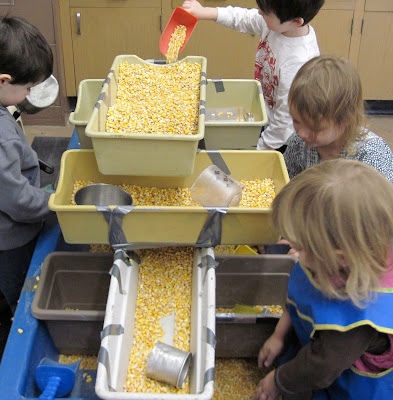 In that post I enumerated all the different physical levels on which the children could and did operate; I counted seven.   Those levels created many more spaces which I did not enumerate.   Now when you have intriguing and complex spaces for children to explore, they will formulate their own play that is both unique and varied.

The simple act of transferring corn from one level to another level takes on a whole new dimension.  Watch as the child in the video below spoons the corn from the bottom of the tub to a shoulder-level tray.


To get the corn on in his spoon, the child had to reach deep into the tub and scoop horizontally with the spoon.  He then had to move his spoon through vertical space all the while keeping the head of the spoon flat and steady so he would not loose any of the corn.  When he reaches the right height, he then has to move his arm laterally to get the spoon over the target tray.  Finally, over the target, he twists his wrists to drop the corn in the tray.  Simple motor play?  Hardly.

That whole process is that much more intricate and complicated when the children are working on and between multiple levels and spaces. 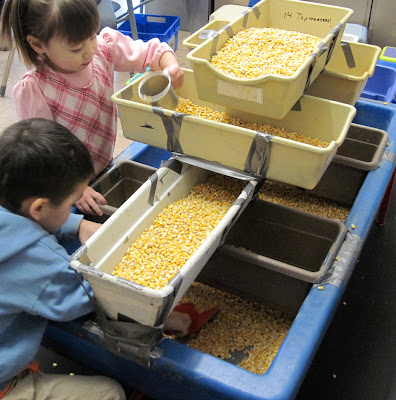 That is one type of play, motor play.
Here is another type of play which can be considered truly sensory.  The girl in the video below is up to her elbows in the corn.  It is safe to say she wants to feel the corn.  Notice how the height of the tray she is working in makes it easy---or even fosters---this particular type of play and exploration.   That is also reinforced by the horizontal nature of the tray, itself.
Did you also notice the cause-and-effect play?  Halfway through the video,  she wiggles her tray. When she does that, she notices that the whole apparatus wiggles.  (Or maybe she was just testing the the integrity of the apparatus.  After all, children are masters at testing the integrity of things.)
Here is yet another type of play, one that can be considered science play.  The girl has scooped up some corn and is dropping it on an overturned pot in the bottom of the table.  She seems to be fascinated by the sound the corn makes hitting the metal pot.  (It reminds me of a recent post by Alec Duncan, a blogger in Australia, who wrote about easy ways to make music with children using natural materials.)
Did you notice that by resting the scoop on the lip of the tray she was regulating the flow of corn being dropped onto the pot?  The lip actually becomes a fulcrum on which she is able to control the tipping of her scoop---which is the lever.  In physics, that is a simple machine.
And finally, here is a type of play that can be categorized as social play.  It began with me trying to sprinkle a little corn on the little baby the girl was holding.  I said it was raining.  She hid the baby under a tray so rain would not fall on the baby.  The boy across from the little girl quickly picked up on the "game."  Watch.
This turned into a light-hearted game of hide-and-seek with the boy trying to "rain" on the baby and the girl hiding the baby up, around, and under the trays.
From this one apparatus, that was five types of play: motor, sensory, cause-and-effect, science, and social.   Does it stop there?  No.  As long as the apparatus is open-ended, there is no end to the variety of play children will create in such intriguing and complex spaces.
Posted by Tom Bedard at 2/18/2012