BEYOND THE GIANT SPONGE

The giant sponge, like almost any other apparatus in the sensory table, is not simply about the senses.  It is about science, too.  Children explore and experiment using their senses to discover how the physical world works.  Depending on the apparatus, the children discover different physical laws pertaining to the apparatus.
In addition, any apparatus has the potential to encompass other areas of development and learning. 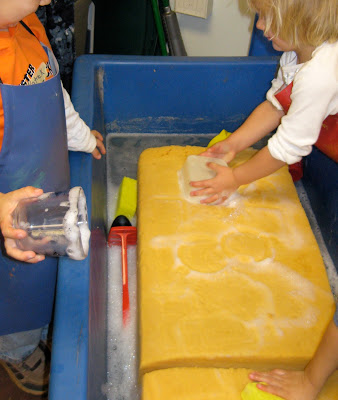 For instance, the sponge was used by two children as a springboard for working with two simple geometric concepts: a circle and a square. They started by each making their own impressions on the sponge; one was making a circle and the other was making a square. Spontaneously, they started putting each of their impressions on top of the other's impression.
As the boy put down the circle, the girl would place her square over it.   In doing so, the circle disappeared.  The boy would then put his circle  over the square and the square would disappear. The children did not know they were doing math, but the concepts of a circle and a square were being consolidated for them in their play in a very unique way.

Not only were these children learning math concepts, but they were also displaying social and emotional learning.   These two children had not played together before, but still  they were able to create their own game that had a simple rule (take turns) and that was very playful (making the other's impression disappear). 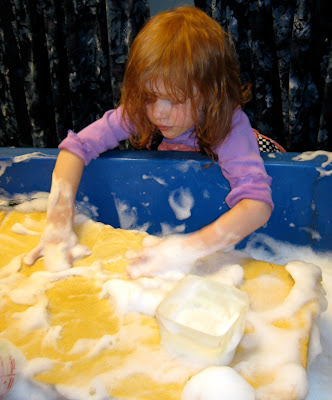 Often times, an apparatus in the sensory table is a rich venue for role play.  A good example of this is when the sponge became the birthday cake and the suds became the frosting. There was lots of spreading the suds on the sponge; singing of the happy birthday song; and cutting of the cake---and not just once.
One of thebehaviors that is often overlooked when children are playing together is social grace and accommodation.  Again, an example from the sensory table containing the sponge can be seen in the following clip:
Three children are playing with the sponge.  Nahum is pouring water and suds over the pie tin that contains Duplo train cars.  His sister, Delina, is playing across from him.   Nahum and his sister speak a language other than English.  Clementine is watching them.  Nahum scoops water and suds from the side of of the sponge and pours it over the pie tin again.  Clementine simply says: "I need some more."  Nahum stops what he is doing, cocks he head endearingly, and looks right at Clementine and repeats: "Some more?"  He then scoops up some water and suds from the side of the sponge and pours it into Clementine's pot.
Social grace is often overlooked because we are expend a lot of energy on the problems of managing classrooms.  This 18-second clip is a perfect example of an act of social grace in which a child is kind and generous to another.  This is an important area of learning because when it self-replicates, the classroom is a good place to be.
Clearly, the sensory table encompasses many areas development.  This is true for the giant sponge and all other apparatus used in the sensory table.
Posted by Tom Bedard at 11/14/2010