Cardboard dividers: a study in proprioception

Proprioception is an inherent sense that tells us our bodies' position and motion in space.  For instance, when you drive a car, you use your proprioceptive sense to know where the brake and accelerator pedals are without having to look at them as you move your foot from one to the other.

Enclosures with holes offer children the opportunity to nourish and sharpen their developing sense of proprioception.  To that end, I offer an apparatus from a few years back that I call: cardboard divider. The apparatus partitions the sensory table into seven alcoves.  Alcoves 1, 2, 3, 5, 6, and 7 are triangles.  Alcove 4 is a square. The children physically occupy the triangle alcoves.  However, the only way children access alcove 4 is through windows. 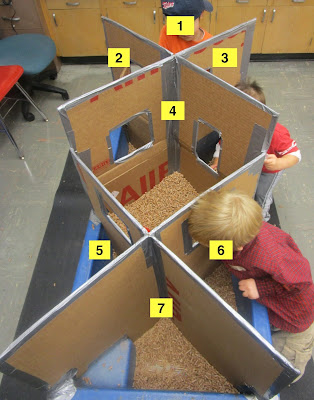 Just the simple acts of scooping and pouring require that the child know how to grip the handle; how to tilt the hand so the scoop can dig into the pellets; and how to twist the wrist to empty the scoop.   A child relies on his proprioceptive sense to complete these actions without having to think about where her hand is or what it is doing. 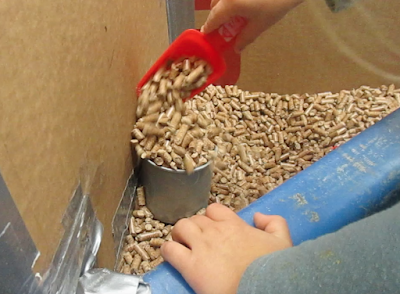 When a child scoops and pours through a barrier, there is an added layer of complexity to how his proprioceptive sense needs to adjust.  Below, the child uses his right hand to hold the window flap open so he can reach through the window to dump the pellets from his scoop. 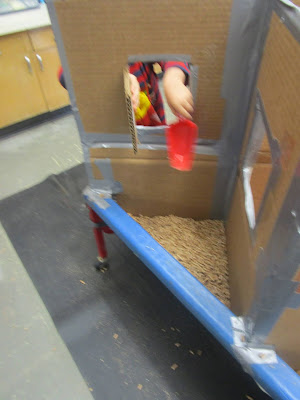 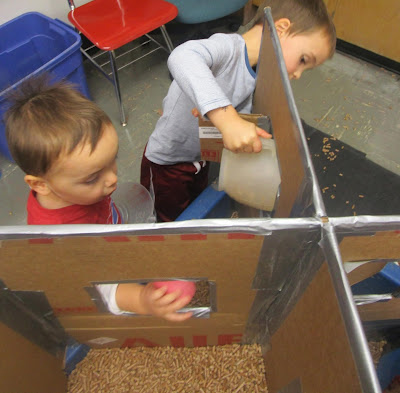 In the picture, he is focusing on the pellets flowing from the measuring cup.  He does not have to look at his fingers, hand, wrist, arm, elbow and shoulder even though he needs to know internally what each of those body parts are doing to complete his operation,

In the picture below, the child is scooping pellets into his small plastic measuring cup from the inner/square alcove.  Even though he seems to be looking at what his hand is doing, the proprioceptive feedback he gets from his hand and arm acting in that space enable his to complete his operation. 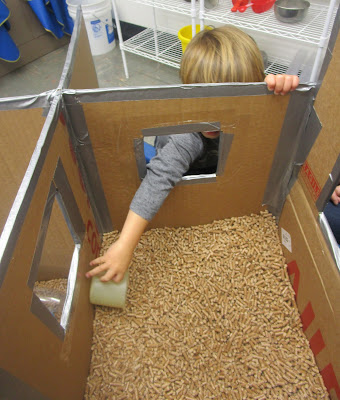 His left hand also plays a part in the completion of his operation.  Somehow he knows that by grabbing the top of the partition, he remains balanced as he digs into the pellets.

In the picture below, the child retrieves a pink plastic cup from the square alcove.  Since she cannot see where she is reaching, she has to rely on her proprioceptive sense in the joints and tendons in her fingers to find, grasp and lift the cup up and out of the alcove. 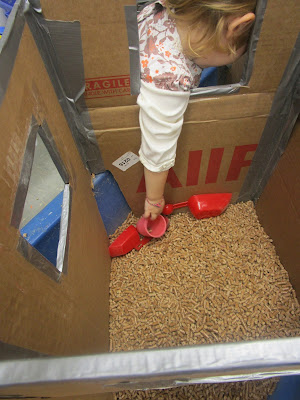 This operation demonstrates how proprioception is needed for very fine motor operations, too.

In fact, proprioception is needed in all motor operations.  The child pictured below is clearly engaged in a large motor operation to access the pellets in the square alcove.  (Silly me, I thought the only way to access that space was through the windows!) 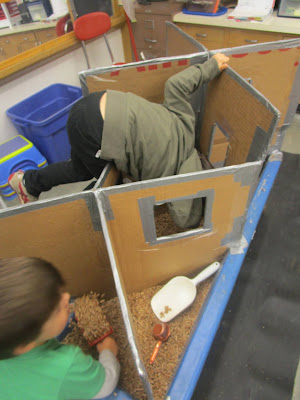 The child surely getting lots of internal sensory feedback so he knows where his body is in that space as he hangs on one of the panels of the cardboard divider.

In an article in TheScientist: Exploring Life, Inspiring Innovation entitled Proprioception: The Sense Within,  the authors write that proprioception "... not only enables us to control the movements we make, but provides us with our sense of self, the awareness of our body and its movements as we navigate through our surroundings."

Proprioception is extremely important.  Can you imagine what a nightmare it would be if we had to take our eyes off the road to look for the brake pedal every time we needed to slow down or stop the car!  Children unconsciously work on their sense of proprioception as they interact with their environment.  I contend that we can help children develop and sharpen their sense of proprioception by offering children interesting and intriguing spaces in which they can challenge what their body can do.