The art of pouring II

To look at these questions, I reviewed the types of pouring at the following apparatus: Concrete tube forming apparatus.  I built this apparatus using concrete forming tubes and a long cardboard tube.  Though it is narrow, it is stable because the whole thing is taped together with three supporting cross pieces taped to the table itself. 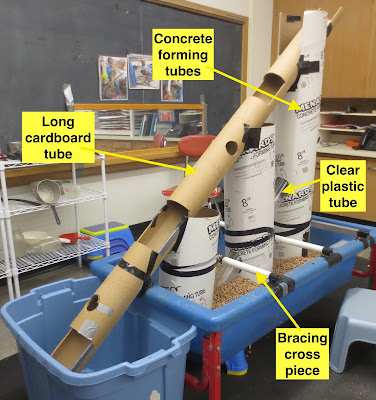 I cut plenty of holes in the long cardboard tube of different sizes and on different levels.  Those holes were an invitation for children to do their pouring. 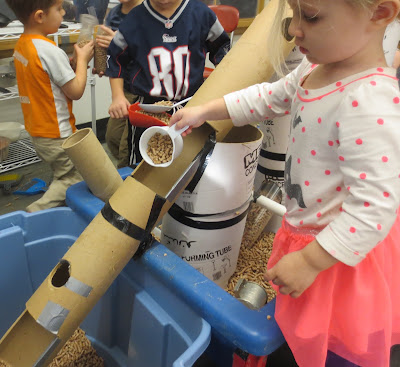 The child pictured above used a plastic measuring cup to pour pellets into one of the rectangular holes.  To do that, she held the measuring cup with her right hand and rotated her wrist and forearm.   Because the apparatus was not restricting her hand action, it was a fairly straight forward operation.

However, that was not the case for the child pictured below.  For this child, he first had to reach into the small round hole with his small scoop before he could turn his wrist and arm.  Since he could not adjust the height of his pour like the child above, he had to raise his arm to shoulder height to complete his pouring action. 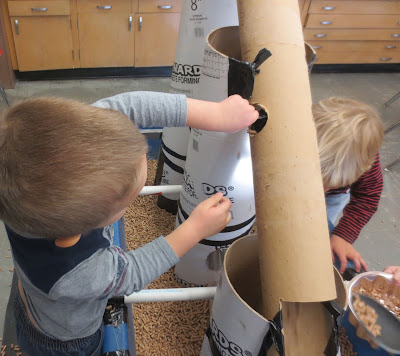 Below, the child found one of the big holes offered by the lowest concrete forming tubes.  She, too, was restricted in her action by the apparatus because she had to fit her pour underneath the long cardboard tube. 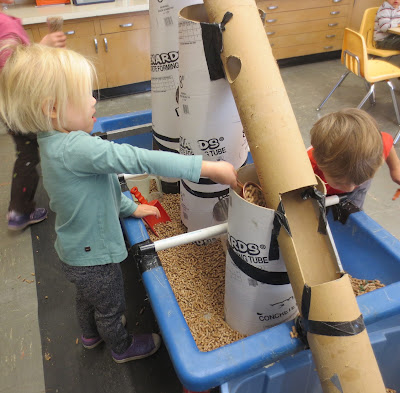 Because her arm was straight, it was not inconceivable that she tried to pour backwards so her wrist turned to the right with the palm up.

The child below found the clear plastic tube embedded between two of the concrete forms.  It is hard to see what both his hands were doing, but he did seem to be using a fine touch to control the speed of his pour with greater precision and accuracy. 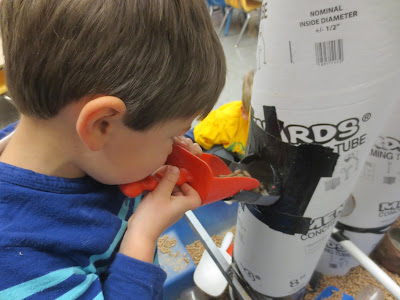 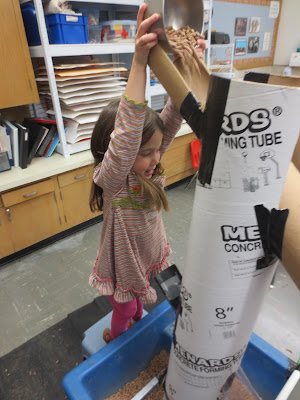 This was truly quite a fete because this pour encompassed her whole body.  Maybe one of the reasons she could not see where she was pouring was because she had to keep her head down to keep her balance.  Besides balancing her body, she had to balance her two-handed grip on the bowl.  She had to hold it loose enough to tilt the bowl, but tight enough so it did not drop out of her hands.


The act of pouring took on decidedly different turn for the child below.  The child created a tool to augment his pouring.

Creating a tool for pouring from Thomas Bedard on Vimeo.

By inserting a loose plastic tube into the mouth of a clear plastic bottle and then filling his new pouring tool to the top, he was able to pour more pellets than if he had used each separately.

In his book Prehension: The Hand and the Emergence of Humanity, Colin McGinn posits that humans have "... an innate prehension program---a universal 'grammar' of grips and manipulations." p. 24.  If true, that means for young children to become fluent in that "grammar," they need plenty of practice with grips and manipulations.   For me, plenty of practice would include experiencing pouring with both wet and dry mediums; it would include pouring into different size holes on multiple levels; it would include pouring with things that were made for pouring and things that were not; and most of all it would include the time and materials for children to created their own self-directed pouring operations.