What are we going to do today?

I am a grandfather.  Over a span of 38 years in early childhood education, I worked with thousands of children of various backgrounds and abilities.   During that time, I came to know and expect that every child was different.  In addition, each child had something new to teach me.  As it turns out, the same holds true for my grandchildren.  Each is different and each has something to teach me individually and collectively.  One salient tangent of that learning has to do with how adults interact with my grandchildren and, by extension, how adults interact with all children.  What I have learned is that adults---for the most part---are always telling children what to do, how to do it and when to do it.  And if they are not telling them directly, they employ all forms of manipulation to get the children to do what the adult wants.  "If you want a treat,  you will have to..."

What happens if we do not feel like we always have to tell a child what to do?  Let me tell you a little story about just such a case with my grandson.  My grandson was three when the following happened.  I went over to his house to watch him for the day because his mother had to work and there was no daycare that day.  I thought we might go to the zoo or a park.  When I arrived at the house, my grandson was just in a t-shirt and nothing else.  His mother had to leave so we said goodbye.  The time was 9:00 AM

I asked my grandson: "What do you want to do today?"  I suggested the zoo or a playground thinking he would likely choose one or the other.  Once he had made a choice, then we could get on with the business of dressing up and going out.   He did not bite on one of my choices.  Instead, he took a balloon from a fabric tunnel that was on the couch.  He proceeded to bounce it in the air.  At this point, I decided that instead of trying to get him dressed and out the door, I would just watch to see what he was going to do.

At this point, he put a mesh laundry basket over his head.  He then put the basket on the floor and crawled in. 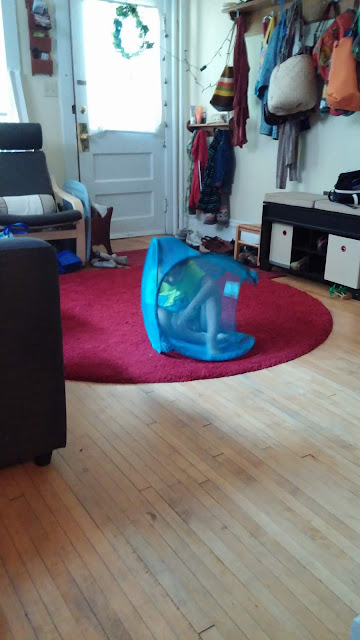 Once in the basket, he rolled around the floor.  He got up and out of the basket only to crawl back in and roll around some more on the rug.   He repeated his actions four times. 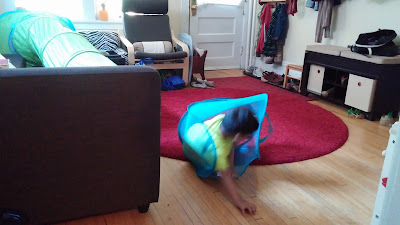 On the fifth iteration of putting the mesh basket over his head and laying on the floor, he was content to just lay in the basket on the floor.  As it happened, his left hand was outside the basket.  He spent a minute or two examining his hand through the mesh.

At 9:16, he climbed out of the basket and onto the couch.  There was a little Fischer-Price house on the couch and he started to play with that quietly.  He played with that house quietly for the next 15 minutes.

At 9:32, he looked up at me.  Without skipping a beat, he asked me: "What are we going to do today?" I was literally dumbstruck, but I took that as my cue that he was ready to dress up and be on our way.

I do not remember where we went or what we did that day.  I do remember that by giving my grandson some time and agency around our morning schedule, I did not need to cajole or coerce him into dressing up so we could get out the door.   In fact, if I had resorted to cajoling and coercion, the whole process of dressing and getting out the door would have taken just as long.  The difference, and it was a huge difference, was how we both felt about getting dressed and out the door that morning.