Over the years, I have built apparatus to divide the sensory table into discreet spaces.  Here is one of the first ones I ever built over 25 years ago.  In this early version, I used a long, narrow box to divide the sand table into two sections. 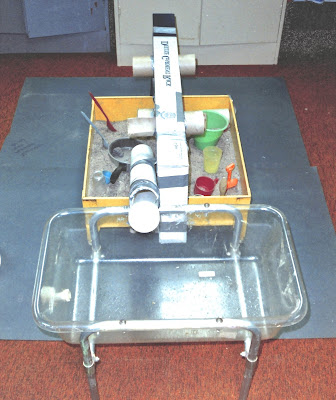 On different levels, I embedded three small cardboard tubes through the box.  I also added a PVC pipe that I taped to the box on an incline.   The box was longer than the sand table so I cut notches in the bottom of the box to slip over the lip of the table on two sides.  That allowed me to securely tape the box to the table.  This structure rose vertically from the table so if it was not securely taped down, the children could have dislodged it by using minimal horizontal force on the top of the apparatus. 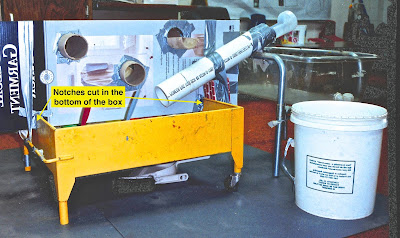 I taped the box above the bottom of the table so the children still had room underneath the box for their operations.

To tape the incline to the box, I jury-rigged a paper brick to lessen the incline and to hold the end of the pipe above the bottom of the table.  To help keep it stable and make the whole apparatus even more secure, I also taped the pipe to the lip of the clear plastic sand table 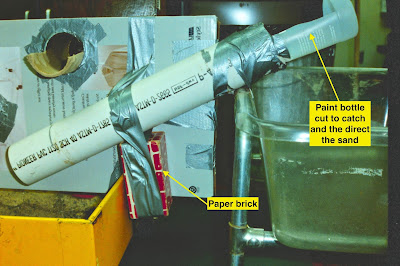 I taped a homemade hopper to the top of the pipe to direct the sand down the pipe.  I made the hopper from an empty paint bottle by cutting off the top and part of one side.  I kept the bottom to give the hopper structural strength. 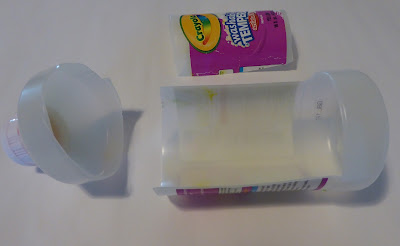 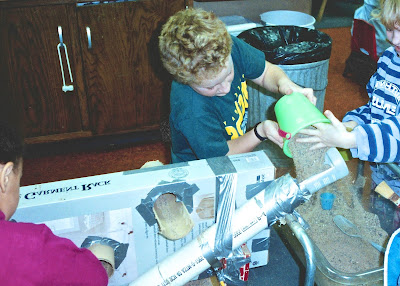 Though the box divided the sand table in two, children used the embedded tubes to connect the two spaces.  In so doing, they were also working on their proprioception.  What physiological feedback did this child get as he put his hand in the tube to deliver the sand to the other side?  And what physiological feedback did he get as he turned his hand inside the tube to dump the sand from the spoon?  He could not see his hand, wrist and part of his arm because they were in the tube, but his internal sensory receptors informed his actions. 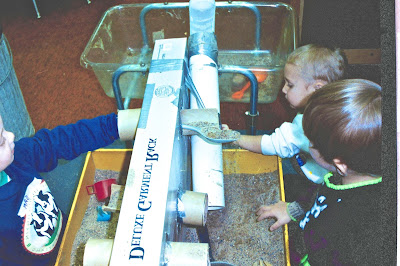 The children also used the embedded tubes to connect in play.  Below, one child is reaching with a spoon full of sand through a tube to deposit it in another child's container.  To guide her actions, she watched her own actions through the tube.  On the other side, a child focused on the spoon and constantly adjusted his actions so he could receive the gift of sand from the other. 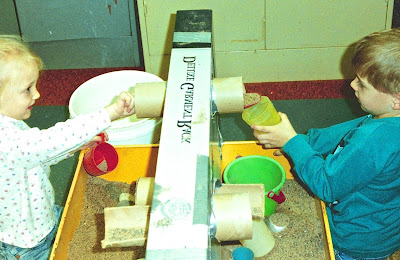 That may look very simple to adults, but it was a highly complex set of coordinated actions.  Were the actions verbally mediated or were they totally action driven?  I honestly do not know, but can imagine that either may have been true.   What I do know is that this apparatus fostered this interaction and without the apparatus, it never would have happened.

I have always been intrigued by how children explore spaces and the elements within those spaces.    Sometimes those explorations are solitary but often times the explorations are in solidarity with others.  They continually improvise within the immediacy of their world.  If their immediate world at the sand table is rich in possibilities, the potential for those improvisations grows exponentially.
Posted by Tom Bedard at 5/05/2018